My water heater went this morning, causing a minor basement flood and a few hours of irritation.

The flood didn’t destroy nearly as much crap as it should have, but there are a few wetted-down bits and scraps that are headed for the trash.

One of them is the back cover of a guitar magazine from sometime around 1985. I couldn’t let it go without posting it here, as a memorial to everything that was wrong with 1980s music.

What we have here is an ad for Kahler tremolos — the pitch-melting guitar devices more popularly known as “whammy bars.”

The impeccably coiffed gent at right, Kahler tells us, is Jeff Loven, and he’s just won something called the Kahler National Tremolo Competition.

Before we go any further, let’s think back to the ’80s, and the offenses against taste committed by whammy bar-wielding hard-rockers in the age of lead guitar worship.

Eddie Van Halen pioneered the extreme use of whammy bars, and he at least was the first to do it; but he cleared a path for a whole decade’s worth of flashy, unmusical dive-bomb retching, usually paired with fingertapping and hyper-fast gnat-swarm picking.

Now imagine a national tremolo competition. Imagine every basement and corner-bar Eddie Van Halen wannabe whipping out their hottest licks. Imagine listening to all those tapes and trying to pick a winner. It makes one of those ten-day jam-band cruises seem heavenly by comparison.

(In the text of the ad, Loven enthuses: “Whether I need an air raid siren or a subtle tremolo effect, I can depend on my Kahler to deliver and stay in tune.” How wonderfully ’80s. Let us be glad we have escaped the days when lead guitar players felt like air-raid sirens were necessary parts of their repertoire.)

We will also take a look at Loven’s group, Obsession, because … well, the bass player seems to want us to look elsewhere, but we’re not so easily fooled. 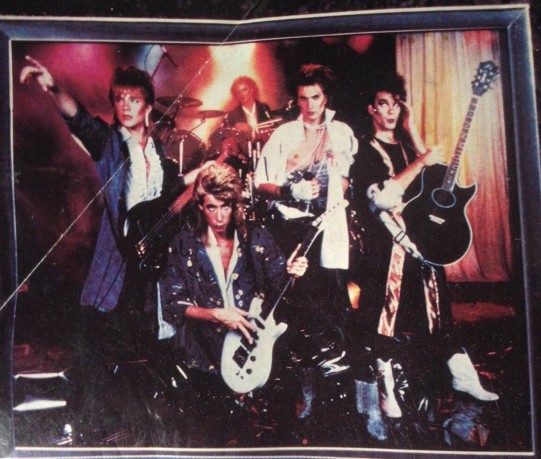 This is a full-on dork-off, locked in a four-way tie for last, and no drummer has ever been happier to be far away from the camera.

Jeff Loven, who still plays in the Midwest and apparently turned down an audition with the latter-day Guns n’ Roses, seems to have a sense of humor about the period. On his website, he says, “Looking back-why did we use that gawdawful Aquanet-yuck!”

To be fair, Loven is probably a great guitar player, and his bands have surely entertained a lot of people over the years. (More people than my writing ever has.)

And he was far from the only person to show up in the spotlight with poodly hair and whammy bar at the ready.

Look in any guitar magazine from that period (I’ve still got a bunch of them, so I speak from experience), and you’ll see multiple photos and articles that have dated just as poorly, all suffused with that ’80s absurdity.

Unfortunately for Jeff Loven and his bandmates, their photo just happened to be closest to the floor when my water heater spit the bit.

And they happened to be identified by name — unlike the finger-tapping, spandex-wearing gent (not a celebrity; probably a model) who showed up in a guitar ad on the other side of the page: 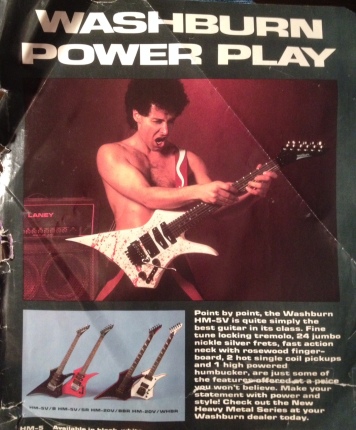 View all posts by kblumenau