Yesterday’s outing for a baseball game at Lafayette College was insufficient to ease my pent-up jones; I had to go to another one today.

Today I took the kids to Moravian College in Bethlehem for an ultra-small-school matchup with Elizabethtown College (it’s somewhere else in Pennsylvania; I forget where.)

Another day, another extra-innings thriller. Moravian’s pitchers only allowed three hits in 10 innings, and the Greyhounds finally put together two walks and a single in the bottom of the 10th to win the game 3-2.

(Today’s game was again to be the first of a doubleheader, but other interests kept me from watching the second, including the dinner whose preparation I am blowing off to write this.)

The great joy of Moravian’s home field, Gillespie Field, is that it’s tucked into a city block in the middle of downtown Bethlehem — maybe not the precise middle, but work with me.

Unlike other local college ballparks — which are either on campuses, or part of off-campus athletic field complexes — Gillespie Field is surrounded by residential streets with old brick houses. It’s a cool, rootsy setting, and one I always enjoy.

Unfortunately, since my last visit, the school has erected a couple of high fences surrounding the field — presumably to protect adjoining homes from the hazards of foul balls. It’s a sound bit of town-gown compromise, but it’s tough to shoot pictures through. 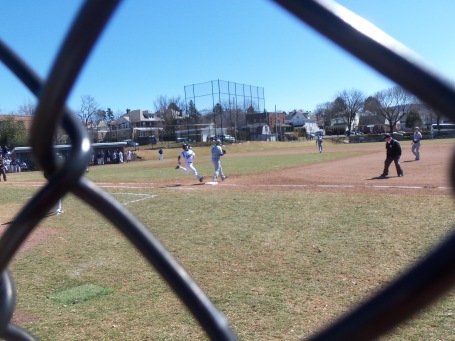 No matter. It was a lovely way to spend an afternoon. And, between this and the Lafayette game, I feel like spring is well and truly here, at long last.

Some more pictures, then:

Elizabethtown is another of those schools that uses a contraction of its name on its jerseys, rather than its team nickname (“Blue Jays”).

Another gorgeous ballpark-in-the-city shot. I’m gonna buy that little brick house and walk to the games. (And then I’m gonna put a sign on the roof that says “450.”)

It looks like there’s not enough dugout to hold the Moravian massive. (Some of these pix might look better if you click to see ’em larger.) 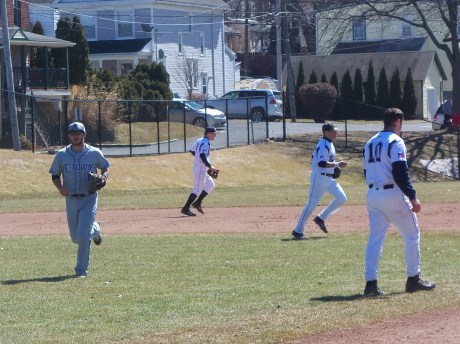 One shift clocks off, the next shift punches in. 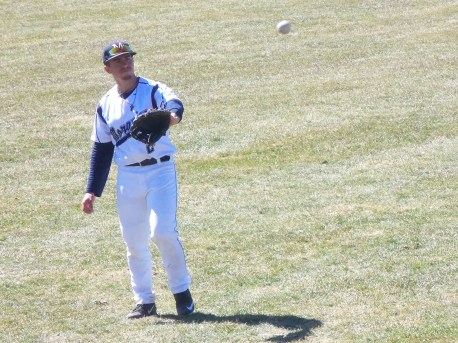 E’town’s first baseman is about to wing the ball across the diamond to catch a Moravian runner trying to take third on the groundout. Something like a 6-3-5 double play.

Blondie doesn’t know it, but this game has only minutes to live. 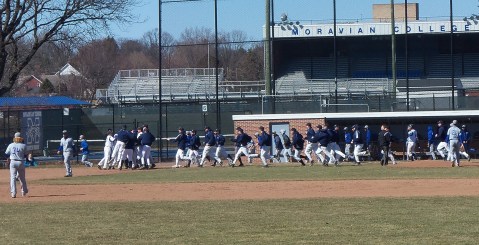 The Moravian victory pileup begins, as the aforementioned Blondie and his mates leave the field.