Another summer night, another new-to-me ballpark.

My wife is out and about all weekend meeting a community of online friends and seeing a couple of Red Sox games. So I went to Worcester last night to watch the Worcester Bravehearts of the Futures Collegiate Baseball League in action.

The FCBL is one of a couple of summer leagues for college-age players doing business in New England. The Cape Cod Baseball League is the region’s prestige institution in that niche — they get the top young talent — but there’s room for others. (The Nashua Silver Knights, who I had a good time seeing about a month ago, are also in the FCBL.)

The Bravehearts have been in existence for a while now. In recent years the Boston Red Sox have moved their Triple-A affiliate into Worcester, providing powerful competition for the dollar. But the Bravehearts are still plugging away, being a touch cheaper, a touch more accessible, a touch more grass-roots than the minor-league affiliate.

For instance, the bases and the pitcher’s rubber at Bravehearts games are an iridescent lime green. (Home plate stays white.) It’s the kind of liberty an affiliated minor-league team probably wouldn’t be allowed to take — and it’s supported by a partnership with a paint company, so it brings a few bucks into the Bravehearts’ till. 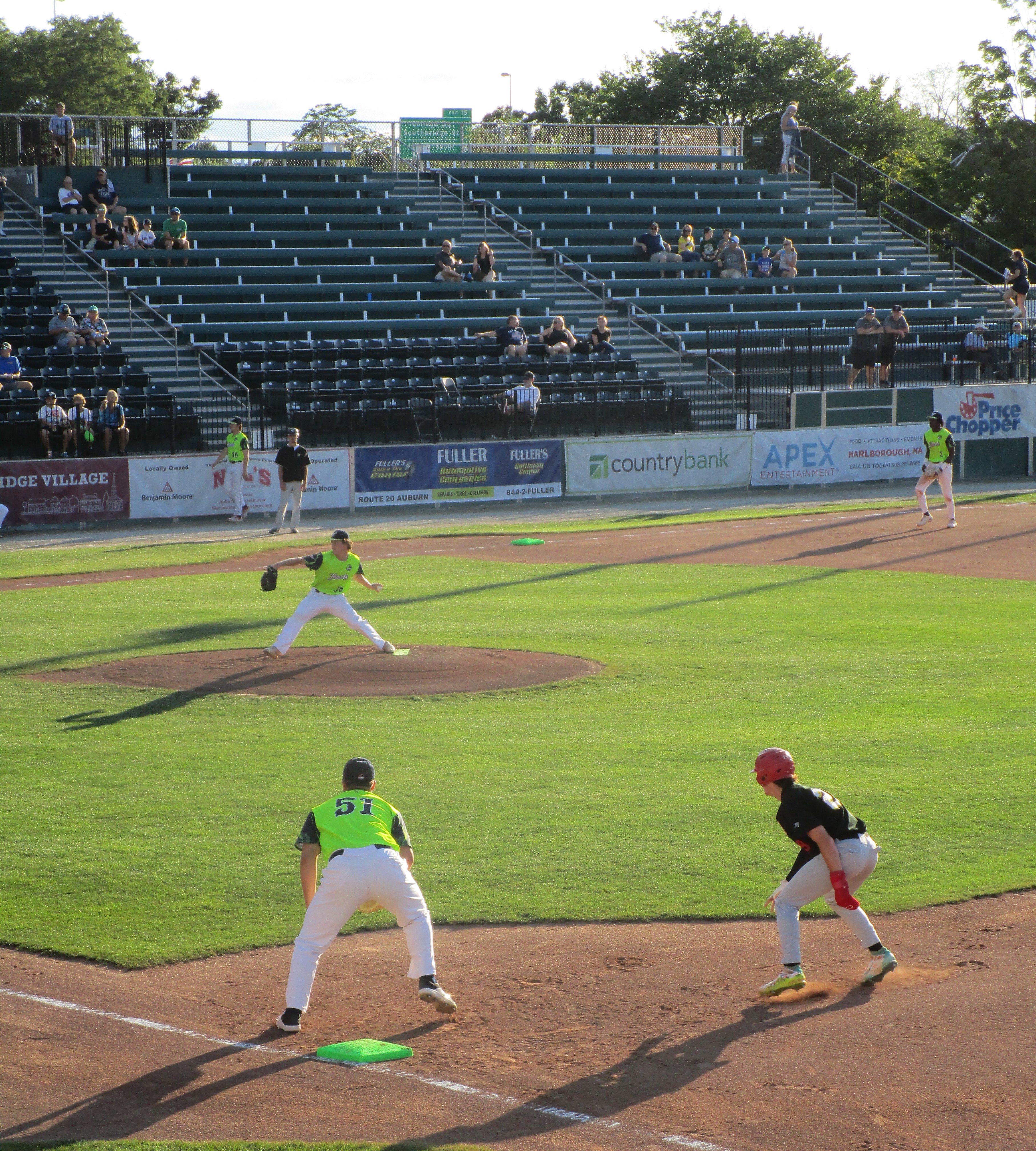 The evening’s adventure brought me onto the campus of a New England institution, about 40 minutes from my home, that I hadn’t previously visited. The Bravehearts play at Hanover Insurance Park at Fitton Field, the on-campus ballpark of the College of the Holy Cross.

It’s a pleasant enough park with a single-level uncovered grandstand seating 3,000. There’s also abundant free parking courtesy of an adjoining multi-level garage, which by itself sets the Bravehearts experience head and shoulders above the Triple-A team in town. (The pic below was taken from the top level of the garage on my way out. Note the charming sliver of moon hanging off in the distance. Hello, moon.) 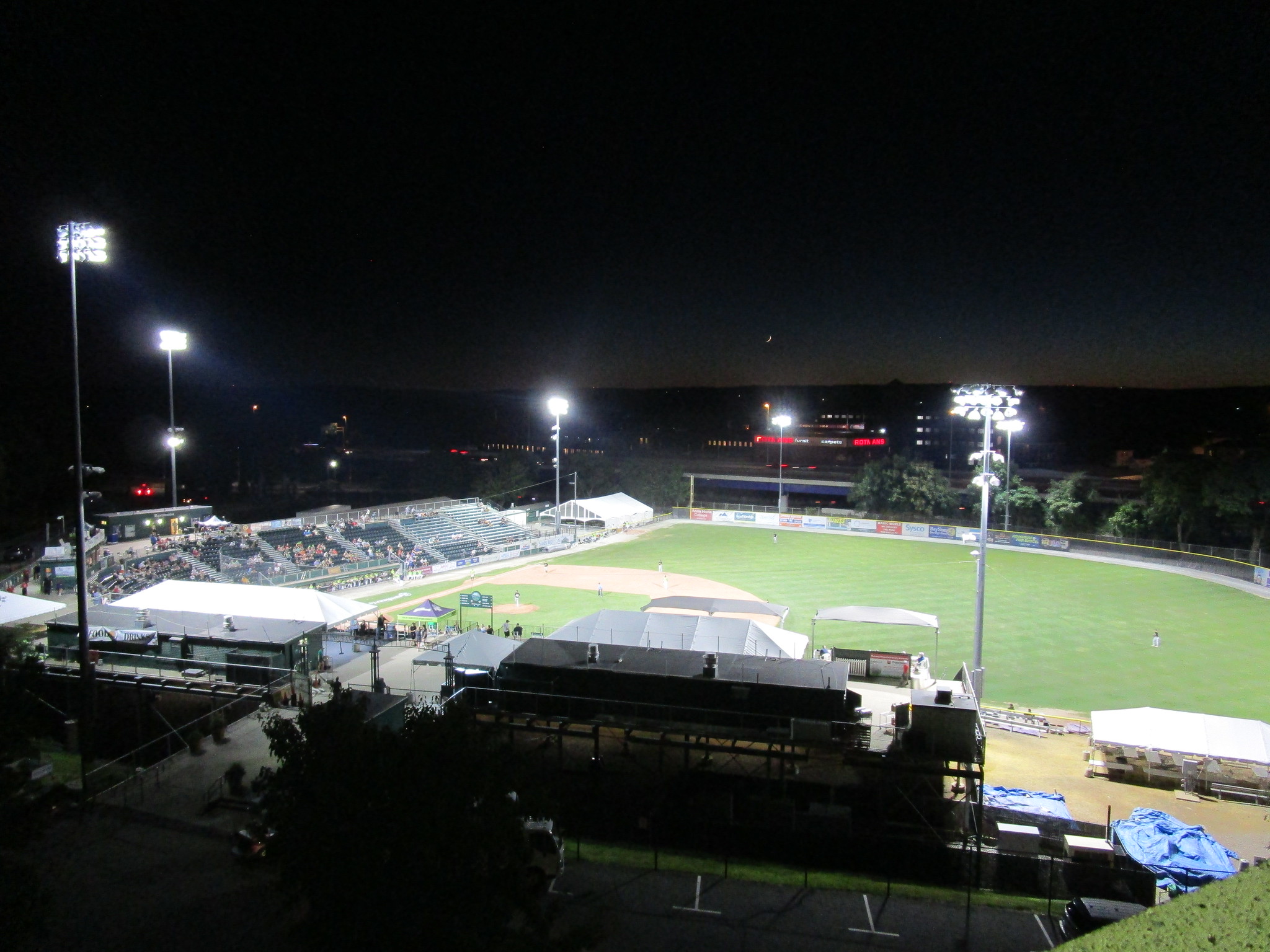 The park has a couple of quirks that add color to the experience, although none of them had a direct impact on the action when I visited.

Right field is oddly bobtailed, and it’s pretty clearly a short poke straight down the foul line. This is because Holy Cross’s football stadium, also called Fitton Field, directly adjoins the ballpark — close enough that right field has to be cut short to make room for it.

The back of the football scoreboard looms over the right-field fence; I wondered if a ball hit off it would be an automatic home run, or considered to be in play. I’m sure there’s a ground rule, but no one tested it. (The football scoreboard is visible in the photo below; of course they’ve hung an advertisement on the back of it.)

I couldn’t tell for sure, but I imagine a truly mammoth and perfectly placed home run — the kind that college kids generally aren’t muscular enough to hit — could probably reach the end zone. 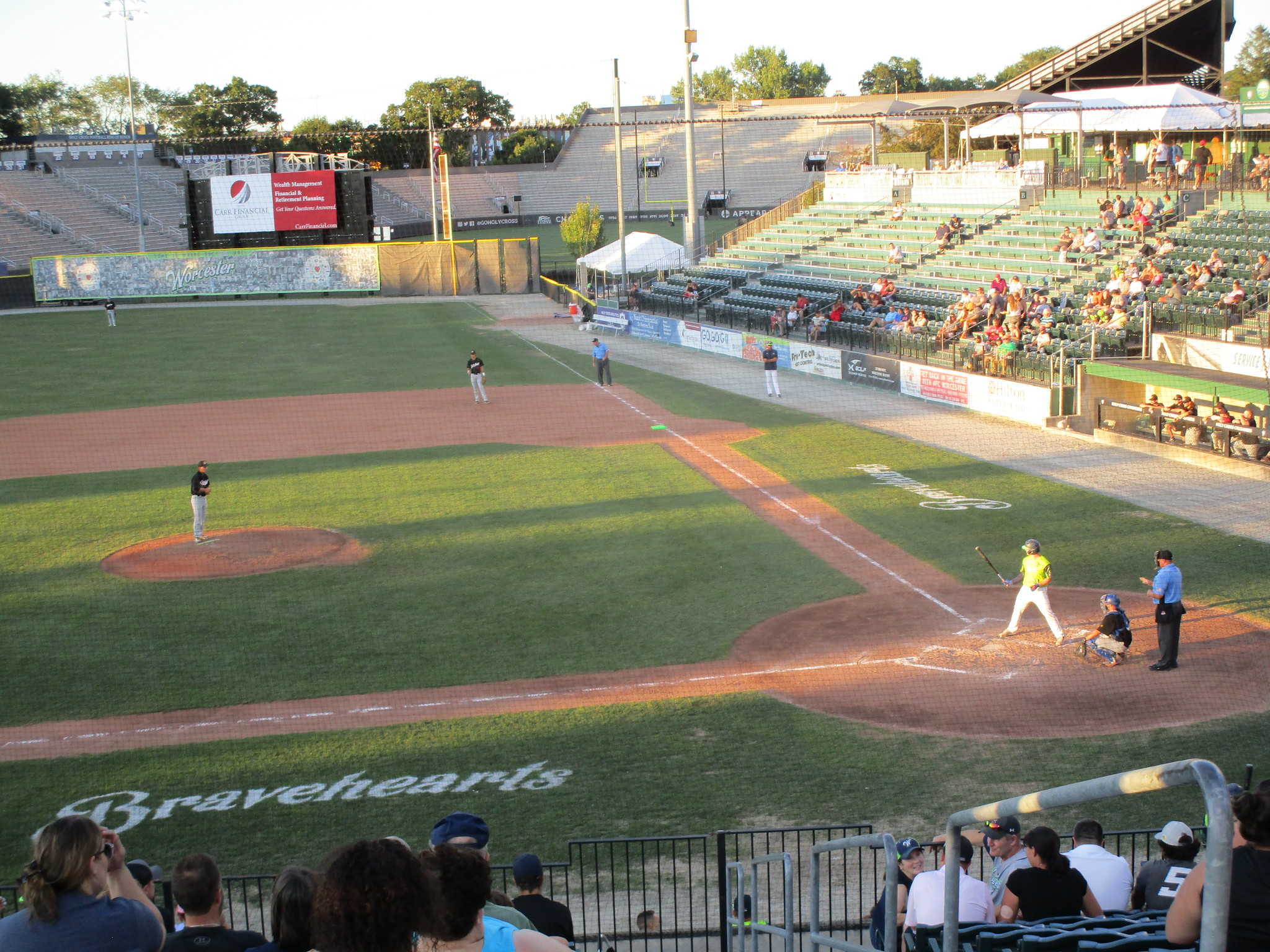 Left field, meanwhile, has two great and colorful features of its own.

First is the elevated and busy highway — Interstate 290, Google Maps says — that runs closely behind the left-field fence. Cars, trucks, and buses rushed past all night. (Pull off, dudes! There’s a ballgame. And plenty of good seats.)

I’m sure a professional slugger could put some windshields at risk … though, again, a 20-year-old college kid with a wooden bat probably isn’t likely to hit one that far and that high. You can’t tell me that at least some of the Bravehearts haven’t spent their summer fantasizing about really getting hold of one and having a great story to tell.

And on the other side of the highway is a big retail building with multiple signs advertising Rotman’s Furniture and Carpets.

I found it a wonderful throwback to old major-league ballparks, like Crosley Field in Cincinnati and the original Yankee Stadium, where outside-the-park commercial signage was part of the in-park experience. (I guess the CITGO sign outside Fenway Park fits this description as well, as did the BUCK PRINTING sign that used to hold a highly visible position outside Fenway.)

To make the Rotman’s signs even more delicious, they (a) are partially made up of lower-case lettering, for a nice ’80s touch; and (b) only kindasorta work when lit up, for that downtown-retail funk. I haven’t been inside Rotman’s but I’m gonna guess it’s not the kind of store that has an espresso cafe and an amusement park built in for the kiddies.

I couldn’t help feeling like that space will probably be occupied in 15 years by a shiny expensive new building with a name like The Gina Luxury Apartments. I hope it isn’t. Not everything has to be shiny, after all … and when I go to a ballpark and look around, it’s not the shiny buildings nearby that I remember years later.

What about the game? Oh, yeah, the game. Worcester fell behind 3-0 early on, then scored six unanswered runs to beat the Pittsfield Suns 6-3.

My biggest on-field memory is that the Pittsfield catcher had a noticeable touch of Steve Sax Disease — even his routine throws back to the pitcher weren’t always routine — and Worcester eventually capitalized on this by having many of its baserunners steal. None of the catcher’s throws to bases were quite on the money, and I believe their errancy contributed to at least two Worcester runs. It was unfortunate, but that’s how the game works; you take advantage of that kind of thing if it becomes apparent.

I enjoyed the trip, and also discovered a new-to-me ballpark refreshment I will have to track down outside the realm of the Bravehearts.

Harvard, Massachusetts, where this nectar gets made, is (like Worcester) about 45 minutes from my house. I’ve been there to pick apples in the fall, as it’s in a band of towns outside Route 495 where orchards still flourish beyond the clutches of developers. Maybe in the fall, when things mellow, I will seek out Carlson Orchards in person.

Can’t get everywhere in one weekend, after all.

Posted in Uncategorized. Bookmark the permalink.
← Heading backwards.
Past LIFEs. →