After 350 days, George Canale shuffles off to a well-deserved retirement tomorrow night.

Canale — or, more specifically, a 1990 Donruss baseball card of the former Milwaukee Brewers first baseman — was my choice for 2015’s #walletcard, as explained in my post of Jan. 12.

(For anyone who doesn’t feel like re-reading: #walletcard is a curious social-media thang among sports card collectors. You pick a card from your collection and carry it in your wallet for a year, taking a picture of it whenever an interesting opportunity arises and posting those pix online. You also report back at the end of the year on the condition of your card after a year of activity.)

I felt most of the year like I hadn’t taken my walletcard out often enough, and that I’d be disappointed when I reached Dec. 31.

But, counting it up now, I posted 31 #walletcard images on Twitter over the course of the year.

Somehow that doesn’t strike me as all that bad. Certainly, I didn’t fall into the trap of taking a pic of it with every day’s lunch, just for the sake of another post.

Thanks, George. It’s been fun.

The salaryman’s Christmas stocking, like those of his kids, usually includes a couple packs of baseball and hockey cards.

And so it was that yesterday, during Belated Christmas Back Home, he took another step into 21st-century pop culture.

In 35 years of collecting baseball cards, I have (to the extent of my memory, and it’s still pretty good) never pulled one with a woman on it.

(This is also the first card I’ve ever pulled to which the words “rockin’ some pleather” apply. But I digress.)

In an attempt to stir up interest among collectors, Topps has taken to lacing its standard set of player cards with bunches of subsets.

Technically, this is not new. Topps has been producing sets-within-sets for decades. Like cards showing boyhood photos of top stars, or cards showing father-and-son player combinations.

But these cards, in the past, were usually tied directly to the prior year’s action … whereas now, Topps seems to take more liberties and license in creating new subsets.

So now, in addition to your basic player cards, you’ll get cards that commemorate a player’s first home run (I pulled the much-sought-after Yadier Molina First Home Run card, commemorating an event that happened in 2004), or cards that pair a current player with a player from the past who allegedly influenced them. (Joe Mauer, meet Rod Carew.)

This group of cards turned a few pop-culture heads early this year, when it was revealed that petulant blues-rock primitivist Jack White would be on one of them. (That bump in public interest probably justified the subset’s existence all by itself.)

Others in the First Pitch set included actor Jeff Bridges; Olympic gymnast McKayla Maroney; marathoner Meb Keflezighi; and this young pop star, who I got back in May when I bought my first and only non-gift pack of the year. 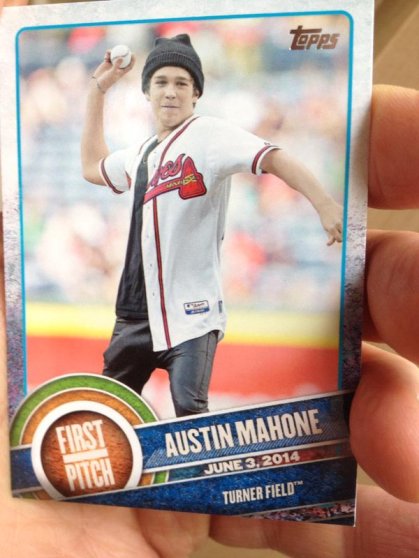 (Correction to the above: This is the first card I ever pulled to which the words “rockin’ some pleather” apply. Is that an iPhone in your pocket, Austin, or are you excited to be on the mound?)

Anyway, I pulled the First Pitch card of comedian Chelsea Handler as part of my Xmas haul.

And it made me wonder how many Topps baseball cards — in the main set, or closely related subsets — have ever featured women.

(I specify baseball cards because Topps has produced all manner of side sets over the decades. I’m pretty sure I have a Star Wars card upstairs from either 1980 or 1983 with Carrie Fisher as Princess Leia on it. But I’m trying to limit my line of thought to cards you might pull if you bought a standard, basic pack of Topps.)

The Baseball Hall of Fame finally got around to inducting its first woman a few years ago, and she’s received cards from other companies, though I don’t know if Topps has done any in its mainstream set.

Also, several women have owned World Series-winning baseball teams — like Joan Payson of the New York Mets, or Marge Schott of the Cincinnati Reds. But while players, managers, coaches and even umpires have been featured on mainstream baseball cards, owners don’t usually get there.

Edit: I’ve also Googled the “boyhood photos of the stars” Topps cards from the ’70s, to see if anyone’s mom or sister showed up. I don’t see any, though the crop job on Willie Horton’s card sure suggests there were other family members in the original picture.)

(Knowing Topps’ fondness for things Yankee, I suspected they might have come up with an excuse to put insufferable Yanks radio announcer Suzyn Waldman on a card. A Google search suggests this has not, in fact, come to pass.)

None of this, even my griping of a paragraph ago, is meant to suggest that cards with women are a bad thing. I ask about them out of historical curiosity, not as a complaint; and I’m hoping that someone who knows their baseball-card history will leave me a comment steering me to some examples from the past.

While I’m not specially a fan of Chelsea Handler, I’m kinda delighted to see something other than a scowling masculine game-face on a baseball card.

Women have always been part of baseball — in front-office roles, now as scouts, always as fans. They ought to be represented in what is still one of the lasting historical records of each season.

And, while I’m generally celeb-phobic, I don’t mind the First Pitch set. It seems firmly enough related to baseball; it’s something you’d see if you went to the park on a given day. Why not put it on a series of cards?

I’m not a hardcore baseball-card collector any more.

But every so often, I check in with people who are; and they’ve recently hooked me on one of those silly-but-fun ideas the Internet creates in great frothing bunches.

The idea is to pick a baseball card from your collection, stick it in your wallet, and carry it around all year. When you’re out someplace interesting, you take a pic of your wallet card, and either blog about it or tweet it. So far, I’ve seen wallet cards frolicking in 20 inches of snow and hanging out in Penn Station.

(You can read about it here — where the idea seems to have originated — and here.)

You want to pick a card you’ve got more than one of, of course, since a year’s travel in a wallet is bound to wear it down. That’s part of the fun for some participants: They want to see what their chosen card looks like after a year of riding around in their pocket. It’s like a science experiment.

I don’t know how avidly I’ll take part over the course of the year … but it doesn’t cost nothin’, and it looks like fun, and God knows I’ve got cards to spare. So I went into my binders of cards today to anoint my own personal #walletcard.

While scanning through my collection, I decided visibility would be a major, if underappreciated, factor in my decision.

I dunno where this coming year will take me, after all. I could be lunching with the Grand Duke of Luxembourg or watching midnight tribal rituals in distant Borneo.

Wherever I go, I’ll need a #walletcard that doesn’t fade into the background. I need something that pops — something that stands up, salutes, and barks: “#WALLETCARD REPORTING FOR DUTY! SIR!”

Thankfully, the designers who created the 1990 Donruss set perfectly anticipated my need. Those red borders, simulated paint-spatter and angled script might not have aged well, but they sure do catch the eye. 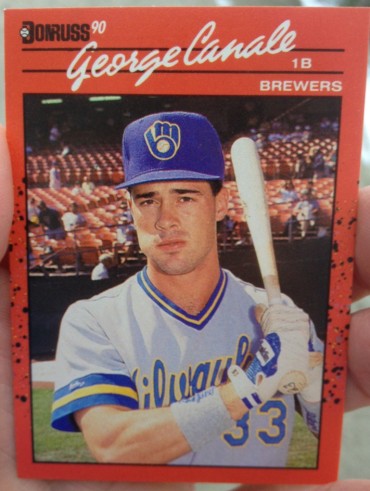 I have no specific personal attachment to George Canale, a Memphis native who hit .164 in parts of three seasons with the Brewers. (Had he played in the National League, I like to imagine Harry Caray calling him George Cannoli.)

But I’ve always liked bit-players and short-timers, so Canale is a worthy pick from my perspective. Why not him?

I like the picture just fine, too. That right there, friends, is what a Milwaukee Brewers uniform is supposed to look like — complete with one of baseball’s great cap logos. Not long after 1990, the team started monkeying with its unis, and .. well, we’ll speak no further of that.

So the Donruss ’90 version of George Canale has been tucked into my wallet. Now I feel obliged to go get into some adventures so he doesn’t think I’m boring. His expression — guarded, cautious — is saying: All right, dude. Whaddya got?

Let everybody else get chocolate bunnies, jellybeans and peanut butter eggs today. For me, Easter is a baseball-card holiday.

(Actually, for me, Easter is not a holiday at all; it’s a day I get off because lots of other people believe something I don’t. But I’ll take it.)

When I was a kid, I got the usual candy-filled Easter baskets like everybody else.

But, noticing my fascination with baseball, my folks started slipping a few packs of baseball cards into the basket as well.

It was a genius move on several fronts. The baseball season is just starting in mid-April, and a young baseball-mad kid appreciates cards even more than usual at that point in time. Plus, baseball cards are a treat with no sugar, fat or calories, which is rare in an Easter basket.

I especially associate the 1983 Donruss set with Easter. I own maybe three packs’ worth of ’83 Donruss, and I know for a fact they came from my Easter basket.

In 1983, Donruss was in its third season of challenging the established giant Topps. They’d gotten past some embarrassing goofs in their first year or so and were putting out cards that were reasonably attractive, yet still noticeably different from Topps.

Like any good baseball-card haul, my Easter take in ’83 included a couple of superstars …

… and a couple of never-weres.

My own kids are not as baseball-crazy as I am, but they have small card collections of their own.

They received three packs of baseball cards in their “spring baskets,” and are engaged in ripping them open as we speak.

If you’ll excuse me, I’m going to join them. 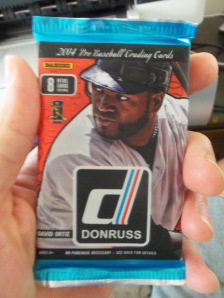