A recurring feature in which I take something I enjoy but have never thought deeply about, and force myself to state five reasons why I like it.

Today’s subject: Fifth album by Jefferson Airplane spinoff band led by guitarist/singer Jorma Kaukonen and bassist Jack Casady, who chose the occasion to morph from a singer-songwriter/ragtime-blues collective to a wall-shaking hard-rock band. Released May 1975. Reached No. 75 on the U.S. album charts. Included “Hit Single No. 1,” but no actual hit singles. Contained obligatory ’70s “play loud for maximum effect” warning. They loved it in Columbus. 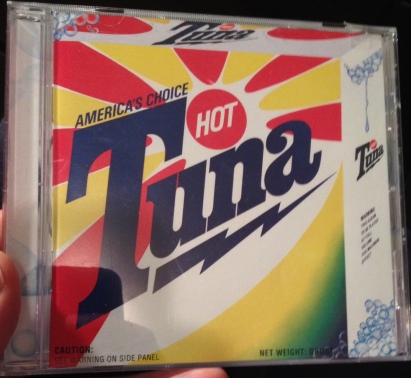 1. Oooh, sudsy. I love the album cover. Love love love it. Right up there with Chicago X in the band-as-brand sweepstakes. Except Chicago was a platinum-selling juggernaut — the Top 40 equivalent of a corporation, and just the sort of band you’d expect to adopt a fancy sell — while Hot Tuna was a scraggly bunch of noncommercial post-hippie freaks.

Seriously, that cover is wicked eye-catching. Plus, by likening the band to laundry detergent (an odd linkage, but whatever), it implies that America’s Choice belongs on the shelf in every home. It’s not just an album — it’s a household necessity. What, you don’t have one yet? You must have … ring around the collar.

2. Plastic blues. I will probably not find the words to describe exactly what I’m thinking … but track three, a throttling of Robert Johnson’s “Walkin’ Blues,” attains a plastic-blues nirvana that I find oddly appealing.

For all its distortion, the song carries the soul and passion of a glass of Tang, and feels just as processed. It is polished, professional and perfunctory. These are musicians who can spit out 12-bar variations in their sleep, and for five minutes and twenty-four seconds, they might well be doing just that.

I’m not making much of an argument as to why anyone should like that … then again, there aren’t a lot of arguments for why people should like Tang, either, and it’s still on store shelves.

Maybe it’s the lack of hot-dogging or over-emoting. I’d rather hear Kaukonen’s understated drawl than somebody who sounds like his toenails are being pulled out.

Or maybe it’s a sort of nostalgia. This is State-Of-The-Art 1975 Rock-Blues, flawlessly recorded (and available in quadraphonic, if you care to look!), and listening to it has a certain period charm for those with imagination.

3. Tones. Speaking of “Walkin’ Blues,” Kaukonen achieves a tone on his second solo I don’t think I’ve ever heard come from a guitar. As a guitar freak, I’d say that’s worth the price of admission all by itself. (You can hear it here, starting at about 3:05 in. I’m sure it’s some fairly common effect, but it perked up my ears when I heard it.)

If you’re a tone aficionado, the album is full of cranked-up, tube-glowing guitar sounds. Check out the spitting-hornet wah licks about 5 minutes into “Funky #7,” for instance.

4. Firmly committed to their limitations. Hot Tuna would have been much more commercially successful — and a measurably better band — if it had hired a good singer and songwriter and confined Kaukonen’s contributions to guitar. (Marty Balin, who filled both bills, was briefly a member in the group’s earliest days, but it didn’t stick.)

And yet, for most of the Seventies, the band plugged on, apparently content with what it was, rather than pursuing what it could have been.

This could represent anything from stubbornness, to self-centeredness, to the band’s Zenlike peace with its own essential identity.

As long as I don’t have to hear Kaukonen’s pinched, nasal singing every day, I prefer the last of those explanations.

A turtle does not aspire to fly, nor a stone to conduct an orchestra; nor should an assemblage of musicians aspire to become anything more than the sum of its parts, however frustrating or one-dimensional that sum might be.

(Hot Tuna was not completely immune to outside pressures: The producer of the band’s last Seventies studio album, Hoppkorv, press-ganged them into doing Chuck Berry and Buddy Holly covers. Perhaps it was that soul-wounding acquiescence to the market that ultimately pushed Hot Tuna to the sidelines, rather than the group’s limited sales and apparently eternal banishment to the small-theater-and-college-gym circuit.)

5. Speed-skating. This last item has nothing at all to do with what’s on the record … but truly, I am hard put to find five objectively good things to say about America’s Choice, even though I feel kindly toward the album, have had it in semi-regular rotation since I bought it, and will probably break down someday and buy Yellow Fever and Hoppkorv to keep it company.

Anyway, the liner notes of the CD restate a story I’d heard from other sources:

During Tuna’s glory years, Kaukonen and Casady became hooked on speed skating, to the point where they’d knock off from work starting in November, go up to Scandinavia, and spend a couple of months of winter on the ice oval.

(In his book about the Airplane, writer Jeff Tamarkin reported that David Freiberg — the Bay Area multi-instrumentalist drafted into the band during its dying days — took up speed skating himself in an attempt to befriend Kaukonen and Casady and draw them back toward the Airplane. It didn’t work … but that must be the furthest any rock n’ roll musician has ever gone to foster interpersonal harmony.)

Kaukonen apparently picked up the sport from his Swedish wife, while Casady became interested while watching the 1972 Sapporo Winter Olympics. That in and of itself is a vision worth pondering — Casady, as purely Frisco-hippie as any musician ever, sitting in front of his TV with an Anchor Steam and a joint, glued to the short-track action.

I guess that’s one thing you can say about America’s Choice: It’s the best heavy-blues album ever recorded by speed skaters.

Hey, somebody’s record had to be, right?