Another day has passed, and Hope’s Treat has further cemented its place in the hearts of the American people.

As a follow-up to yesterday’s post on this subject:

– The experimental EP I cooked up by manipulating 70-year-old home recordings of my grandpa’s piano playing is currently the sixth-most-popular Bandcamp recording with the tag “Allentown.” 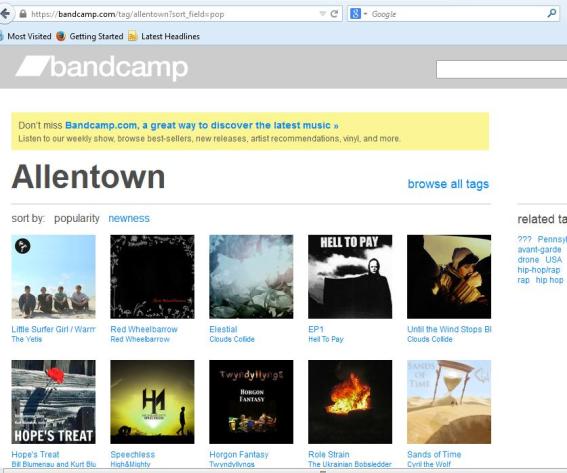 Almost 30 years after he moved out of town, Bill Blumenau is an overnight sensation. 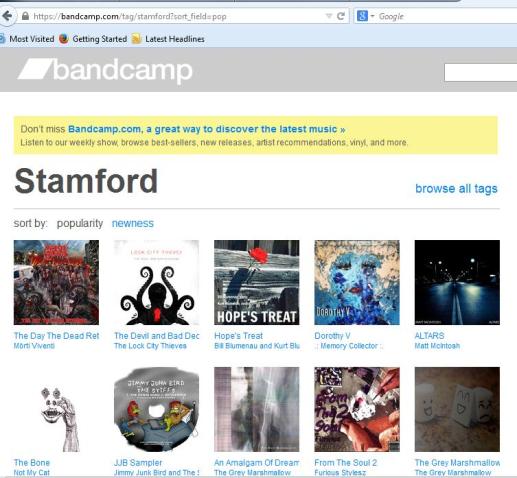 – And finally, Hope’s Treat leapt a rousing 200 spots, currently ranking No. 174 among the most popular recordings tagged “Connecticut.” Instead of page 10, it’s now on page 5.

(The folks in Walnut Shitstorm, for what it’s worth, are still mired on page 9.)

Now, lest this post be misconstrued, let me address some questions my Four Readers are probably asking:

– I’m not gonna keep posting these updates every day. I think they’re getting old too.

– I’m not really that interested in the “chart performance” of my noisy little EP as compared to everyone else’s noisy little EPs. These popularity rankings could be generated at random by goats, for all I know, and I don’t put as much stock in them as I’m probably making it sound.

(Even if I did clearly understand how the charts were generated, they’re still only measuring one tiny slice of one music site. Having the third-most-popular Bandcamp recording tagged Stamford is sort of akin to having the third-most sacrifice flies in Stamford Little League.)

Still, I have a bit of chart geek in me. And it’s kinda fun to play at the chart-geek thing when it’s your own name on the chart — no matter how obscure the ranking might be, or how small a pool you’re swimming in.

Plus, with the burst of initial interest in Hope’s Treat wearing off, today’s placements are probably about as high as the EP is going to get. I think those who are going to find it have found it.

So I’ll enjoy the high-water mark, however dubious and paltry it might be.

My maternal grandpa was a well-meaning but mediocre photographer, skilled at bringing the shutter down a moment too early or late, or in taking pictures of things that were not as quirky or offbeat (or well-lit) as he thought.

I’m going to dredge some of his efforts out of the family scrapbooks where they sit unappreciated, and bring them out for contemplation.

Harry, I speak for all of us at the firm when I wish you a long and happy retirement. As long as any of us can remember, you’ve been on the job, quick with a smile and eager to help.

Now, as you head off to enjoy your golden years, we’ve all chipped in to get you a small token of our esteem.

Y’see, Harry, regular interaction with other people is gonna go from a daily reality to a distant memory, sooner than you know.

With your new television set, you can establish rewarding interpersonal relationships with the casts of such quality programs as “Occasional Wife,” “The Monroes” and “Pistols n’ Petticoats.” Pshaw, Harry! Retirement need not be lonely.

And when the arthuritis locks your knees so badly you have to sit still for three or four hours, your TV will allow you to live vicariously through the antics of the Yanks, Mets and New York Football Giants. Yes, nothing keeps a man quite so young as televised sports!

But that’s not all. Sister Bertrille — and yes, red tartan looks fantastic on you, Sister — would you tell Harry more about his new television set?

That means watching the TV never has to be boring. When you get tired of watching in the den, you can move your set to the kitchen. Then, after a few weeks, you can move it back to the den. And in the summer, you can even move it to the screen porch.

(As long as you’re still physically able to lift it, that is.)

There’s nothing like a TV set to remind you you’re alive, Harry.

Why, I was up late the other night after a couple beers, and there was this actress in an old black-and-white movie who looked just like a girl I dated when I was 19. Yeah, we were real close, she and I. In fact, seeing that face felt like somebody had grabbed my heart and turned it about 90 degrees counterclockwise. That’s what I mean by feeling alive, Harry.

Anyway … we’ll all miss you.

But now that you’ve got America’s best friend to keep you company — in any room of the house! — we know you’ll be just as busy, engaged and on top of things as you were in your days at the firm.

June 1967, Stamford, Connecticut.
It was a retirement party; that much is true.

My maternal grandpa was a well-meaning but mediocre photographer, skilled at bringing the shutter down a moment too early or late, or in taking pictures of things that were not as quirky or offbeat (or well-lit) as he thought.

I’m going to dredge some of his efforts out of the family scrapbooks where they sit unappreciated, and bring them out for contemplation.

Thanksgiving is probably the most unchanging and constant holiday this country has to offer.

At Halloween, the costumes differ from year to year.

At Easter, the kids outgrow their fancy clothes from year to year, and maybe the Easter basket holds some new or different treat.

And of course Christmas is defined, at least in part, by that year’s gifts. If you have a snapshot with gifts in it, you can extrapolate how old any given member of your family needed to be to receive that particular present.

Thanksgiving, on the other hand, can only be judged based on how many members of the family consort are there to take part in the festivities, and how gray they look compared to other years.

Thanksgiving snapshots fall into the realm of  The Eternal. All across America, there is One Turkey, and One Boat of Gravy, and One Tureen of Mashed Potatoes, forever and ever, world without end, amen.

The person who said “you never step into the same river twice” never took part in an American family Thanksgiving. It is the same river of lumpy gravy every year, as long as the background setting (your grandparents’ house) does not significantly change, and as long as cirrhosis or cardiac arrest or diabetes do not carry off any of the principal players.

(Someone once quipped that Thanksgiving is the one holiday at which all thoughts of sex disappear. And so it is — a rejection of the outside world, and an embrace of the family structure you have already built for yourself. Dressing in brown sweater vests and overeating on turkey and pumpkin roll doesn’t make anyone feel sexxay, either.)

Here, then, is an underexposed picture of a family gathering. It is probably Thanksgiving, though the labeling is not crystal clear.

If you are missing a year of Thanksgiving from your family photo scrapbook, feel free to borrow this one. It will do as well as the real photo — the long-lost one with your actual family members in it.

The turkey and gravy tasted the same to our family as your turkey and gravy did to your family. It was doubtless an hour or two late and maybe a little on the dry side, as yours was. There was football on a bulky TV beforehand, and pie and wiped-out conversation afterward, just like at your house in Pennsylvania or Wisconsin or Idaho.

There is no chandelier in America powerful enough to cast real light on the withdrawn, somnambulent suburban parade that is Thanksgiving.

Pass the cranberry sauce, won’t you? 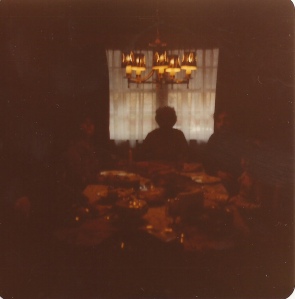